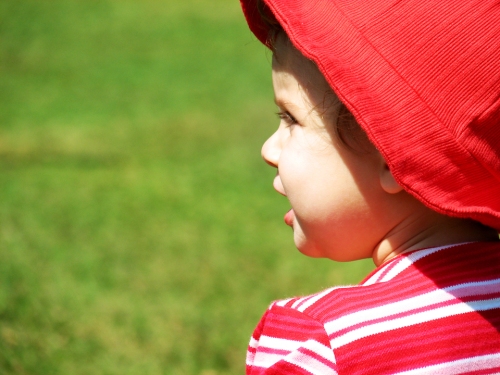 I typically have two or three blog post ideas kicking around in my head at any given time. So I’ve had a couple in mind for the last week, but after the election results I just couldn’t bring myself to write a light-hearted piece about the trials of parenting.  Trump’s win is weighing too heavily on my mind.  Thoughts about it have literally been keeping me up at night and making me sick to my stomach.  I NEVER intended to bring politics into my blog, but as someone who is committed to being open, honest and raw about my feelings and my personal experience, I felt compelled to write this.

When I think about the four years of Trump’s presidency, over which my son will grow from a 3 year-old to a 7 year-old, and my baby will come close to turning 4, I feel overcome with anxiety.  I understand that there will be presidents throughout their lifetime that I don’t agree with ideologically, but the example that Trump has set seems to go against virtually everything I want to instill in my little ones.

I want my daughter to value herself for her intelligence, her character, and her abilities, rather than the way she looks.  Our president-elect says that it’s hard for a flat-chested woman to be a “10.”

I want both of my children to know that women are deserving of respect and never to be treated as sexual objects.  Our president-elect bragged about grabbing women by the p**** and joked after Princess Diana’s death that he could have slept with her.

I want my children to recognize the dignity and humanity in everyone they meet, regardless of their race, ethnicity or religion.  Our president-elect declared a policy to ban all Muslims from this country.

I want my children to treat those around them with kindness and compassion.  Our president-elect openly mocked a reporter’s disability.

I want my children to know that violence is never the way to resolve an issue or deal with people who have different views than your own.  Our president-elect defended his supporters who beat up a peaceful protester at his rally.

I want my children to continue the battle to overcome the racial prejudice that has stubbornly plagued our country. Our president-elect has repeatedly retweeted avowed white supremacists.

I want my children to value the beautiful diversity of our country, and to have enough compassion to understand that many seeking to come here, whether as refugees or immigrants (through legal or illegal means), want what the rest of us want: to raise their families in a place that offers safety, stability in and economic opportunity.  Our president-elect said the “When Mexico sends its people, they’re not sending their best.   They’re not sending you […]  They’re bringing crime.  They’re rapists.”

I want my children to live in a country where, gay or straight, they have the same freedoms, protections, and an equal right to the pursuit of happiness as everyone else. The president-elect has vowed to nominate conservative justices to the Supreme Court that have the very real potential to strike down marriage equality (along with many other signs of policies that will not be friendly to the LGBTQ community).

I want my children to learn to take the high road, to know that if someone criticizes them, they do not need to retaliate against every insult.  Our president-elect went on the attack against parents whose son sacrificed his life in service to this country, because they dared to criticize him.

I want my children to have respect for members of the military.  Our president-elect stated that John McCain, who was a prisoner of war for more than 5 years, during which he was repeatedly tortured, was not a war hero, adding “I like people who weren’t captured.”

It’s not the president’s job to instill my children with values – that job belongs to my husband and me.  I understand that.  But when you hold the highest office in the land, every word you utter can have global consequences – the stock market and foreign currency values were impacted within hours of Trump’s victory.  The president’s words send a powerful message to this nation’s citizens and have very real, very tangible consequences.  I can’t help but contrast Trump’s rhetoric with the words of George W. Bush in the wake of 9/11:

I also want to speak tonight directly to Muslims throughout the world. We respect your faith. It’s practiced freely by many millions of Americans and by millions more in countries that America counts as friends. Its teachings are good and peaceful, and those who commit evil in the name of Allah blaspheme the name of Allah. The terrorists are traitors to their own faith, trying, in effect, to hijack Islam itself. The enemy of America is not our many Muslim friends. It is not our many Arab friends. Our enemy is a radical network of terrorists and every government that supports them.

Whatever criticism people may have about our former president, he used his bully pulpit to support unequivocally the values of tolerance, unity and respect.  I personally believe that his words went a long way to keep the nation from turning their fear and anger into retaliatory acts of violence against those who were or appeared to be foreign-born.

Looking back at Donald Trump’s words and actions over the course of the campaign, I just don’t know how to view them as anything other than a pattern of misogyny, xenophobia and bigotry.  Let me state this really clearly: I KNOW THOSE ARE NOT THE VALUES HELD BY MOST TRUMP SUPPORTERS.  But I truly fear that putting this man into the highest office in the land will embolden those who do hold sexist, racist, and xenophobic beliefs, and there is already evidence that this is happening.  I truly, sincerely hope and pray that I am wrong, because this is not the America I want to raise my children in.

2 thoughts on “Raising My Children in Trump’s America”